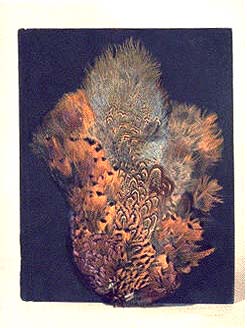 
In 1975 I was asked to submit a binding for the Guild of Book Workers exhibit at Yale. I had a copy of The Birds of North America that needed a binding. One afternoon the street vendor on my corner pulled out a complete Pheasant skin, replete with feathers, and said, "you got any use for this?" It was obvious. I put the bird on the cover of the book.

Satisfied with my new work, I shipped it off to Yale for the exhibit. Little did I think that such a simple binding would ruffle so many feathers! The first report I got was that the conservator screamed when she opened my package and saw what at first glance appeared to be a dead bird.

By today's standards the binding looks conservative. But back then all the other bindings were inlaid and tooled leather, and sewing a whole pheasant onto the cover of this book was considered too radical! They decided to eliminate my Work from the exhibit. But Polly Lada-Mocarski, the great bookbinder and then Trustee of Yale, and the late Prof. Norman Pierson came to the support of my work. The show opened with The Birds of North America in it. The controversy over this book had spread around New Haven, which drew an unusually large crowd for a show of bindings.

At the time we were publishing Book Arts magazine at the Center for Book Arts, and a week after the opening I came back to Yale with one of my apprentices to photograph the exhibit for a review. I was surprised to walk in and see the case that had held my book was empty! Dale Roylance was the curator of the Arts of the Book room. I found Dale and asked him what had happened. "It was falling apart, so we put it in the Beineke Library vault," he answered. "Let's take a look at it," I said. He sent for the book, and it appeared just as I had left it. "See," Dale said, "the feathers are loose."

Some of the feathers had always been sticking out at odd angles. I pulled a few feathers off the bird and scattered them around the exhibit case, telling Dale, "If anybody asks, tell them the bird's molting!" He put it back in the exhibit.

I didn't get what all the hoopla was about. To me it was a fairly straightforward binding, almost DaDa in its simplicity, but more along the lines of "material as metaphor" that I had started exploring in 1973 with my binding of Pettigrew's History of Egyptian Mummies, a 19th century book which had been brought to me for repair. I had wrapped it in strips of linen (reproduced in the book/catalog of "The Object as Poet" exhibit that was at the Renwick Gallery and the Museum of Contemporary Crafts in 1977). So I asked Dale, "What's the problem with this book, anyway?" He said, "How do you store a book like this next to other books on the shelf? and how do you read it?" At that time book-objects were not so prevalent as today, and definitely not in the world of fine bookbinding.

When we got back to New York, the apprentice (Deborah Gillen) said, "Let's take a picture of How to Read The Birds of North America." So she posed me sitting nude on the 8 x 12 Chandler and Price printing press, with the book in my lap. One of my students was a wonderful photo printer, and made a superb print of the picture.

Fast forward 30 years. In 2004 the Yale Arts of the Book Collection, under the leadership of its new Curator Jae Rossman, purchased my archive. In 2006 The Guild of Book Workers selected The Birds of North America for it's 100th Anniversary Retrospective Exhibition at The Grolier Club. I was also asked to be one of the three jurors who selected other artists' works for the Contemporary Exhibition, which also was at the Grolier Club and then had a national tour. You can read my "Juror's Comments."

To top it all off, after the exhibition the owners of this book, still happily married, decided that such an important work belonged in an appropriate institution, and it was purchased by the Yale Arts of the Book Collection, where it is now perched.