The Bill of Rights

Since 1993 Richard Minsky has been creating unique and edition works representing the first ten amendments to the United States Constitution. Click the links for information about the Unique Works or Bill of Rights Edition, or look at detailed photos and specifications of individual works by clicking the images below. You can also look at an installation of the exhibition and read the review in the New York Times.

Reliquary for the Ashes of Salman Rushdie's Satanic Verses
From The United States Constitution series, "The Bill of Rights" section, this work is subtitled The First Amendment.
Bound by Minsky 1993
19" x 8" x 11"

From The United States Constitution series, "The Bill of Rights" section, this work is subtitled The Second Amendment.
Created and bound 1996-98
43" x 43" x 10"

Seven books on the American Militia movement, the right to bear arms, and the gun culture, in a snakeskin cabinet with a Norinco MAC-90 semi-automatic rifle, three loaded clips, and a thousand rounds of ammunition.

From The United States Constitution series, "The Bill of Rights" section, this work is subtitled The Eighth Amendment.
Bound by Minsky 1996
10" x 8" x 7"

Chain binding with handcuffs and padlock, painted in acrylic prison stripes over publisher's binding, with isbn number stamped in hologram foil, in a case with jail doors. Acrylic/latex over wood. The book was published by G.K. Hall in 1990.

The Bill of Rights Edition

Reliquary for the Ashes of Salman Rushdie's Satanic Verses.

Upon publication the author lost the freedoms of Press, Religion, Speech and Assembly in some countries. The Fatwah issued on Rushdie and the book-burnings made headlines around the world.

by Morris Dees with James Corcoran

Morris Dees is the Chief Trial Counsel of the Southern Poverty Law Center. This book documents the hate group roots of the militia movement.

Seven Days in May
by Fletcher Knebel and Charles W. Bailey
with a dvd of the film starring Burt Lancaster and Kirk Douglas
directed by John Frankenheimer, screenplay by Rod Serling

The Third Amendment sets a clear boundary on military authority. In this classic story the Chairman of the Joint Chiefs of Staff is seeking to quarter himself in The White House.

The novel that introduced us to Cyberspace. Every day there are more issues about government searches of our emails, web habits, and hard drives. 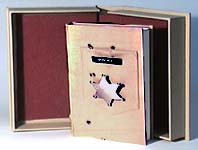 Written in the first person as the story of a Sheriff in Texas who is judge, jury and executioner. Each copy of the book has 9mm bullet holes shot through the cover, a Sheriff badge, and the title is affixed as a name badge. This edition of Branches includes color prints of the 16 illustrations, tipped in over the black and white reproductions in the book.

The Run of His Life : The People v. O.J. Simpson
by Jeffrey Toobin.

This was the most public trial in history, with many questions about the jury, witnesses and defense counsel. It occupied the television networks day and night. Before the trial began, the author wrote in The New Yorker that the defense would play the "race card" and claim Mark Fuhrman was a racist who was framing Simpson because he was black.

The Litigation Explosion:
What Happened When America Unleashed the Lawsuit
by Walter K. Olson

In 1789 twenty dollars went a long way. Since the 1970's "civil" lawsuits have flooded the judicial system. Now a multibillion dollar business, the litigation industry proceeds on flimsy pretexts, preceding a search for evidence.

During the 1990's the drive toward prison reform reversed. Prison libraries were closed, chain gangs and striped uniforms came back, and prison populations increased. 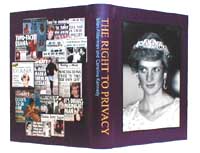 The Right to Privacy
by Ellen Alderman and
Caroline Kennedy.

We all assume we have a right to privacy, but every day that right seems to diminish. From our personal data on the internet to telemarketing at dinnertime, we are barraged. And that's just the tip of it. This book identifies many serious legal issues surrounding privacy considerations. 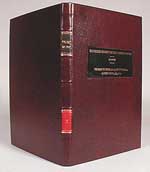 USSC No. 00-949
by The Supreme Court of The United States of America

This is the decision of the Supreme Court in the landmark case that determined the outcome of the 2000 election, Bush vs. Gore. This ruling, overturning a decision of the Florida Supreme Court, is arguably the most significant Federal intervention in states' rights in modern history.