On exhibit in 1981 at the Allan Stone Gallery, New York City

This book was originally purchased as a paperback. The surface-dyed glazed sheepskin is abraded by the barbed wire every time the book is opened and closed, exposing the inner flesh that contrasts with the grain of the leather. The action is not so extreme as to cause the book to disintegrate rapidly, but slowly erodes the decorative surface of the skin. The 23K gold title remains bright. 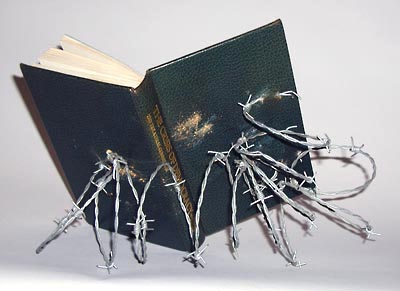 The barbed wire springs back to form a reading stand.

The authors propose that there is too much freedom in contemporary democracies, and that it is necessary to curtail personal freedoms in order to preserve the governability of democracies. In 1980 the choice in the USA presidential elections was of three teams, all of which included at least one member of the Trilateral Commission, an organization  founded in 1973 by David Rockefeller and Zbigniew Brzezinski. I exhibited this book as a political commentary, choosing the materials to reflect the metaphor of the text.

The first Trilateral Commission member to ascend to the U. S. Presidency was Jimmy Carter, elected in 1976. For the following four decades the Presidents of the United States, groomed for the position by the membership of this group, worked toward consolidating power in the Executive branch. The terror attack of Sept. 11, 2001 precipitated the passage of the USA PATRIOT Act, which had failed to pass during the Clinton administration, but was on hand for the (George W.) Bush administration to speed through Congress.

The Crisis of Democracy was the first of many bookworks on social and political issues.

In 1993 I started work on a series of bookworks about The Bill of Rights. For the first eight years there was almost no interest in this Work.  The edition that developed was scheduled for exhibition in May, 2002 at The Louis K. Meisel Gallery in New York City. By then the PATRIOT Act had passed, and public awareness of rights that were being lost was growing. The New York Times gave The Bill of Rights exhibition a six-column review.

The Bill of Rights edition
A set of ten bookworks representing the first ten amendments to
the United States Constitution, in an edition of 25 copies

Each section has several thumbnail images and descriptions of the works. You can click on any image for a page about that work, with larger pictures and details.