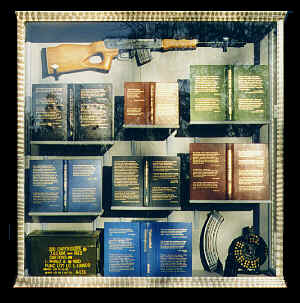 The Bill of Rights
The Second Amendment

Bindings, cabinet and installation by Minsky, 1996-98

Click on highlighted titles below to see details of each binding.
A well regulated Militia being necessary to the security of a free State, the right of the people to keep and bear Arms, shall not be infringed.

The Militia movement in the United States expanded dramatically in the mid 1990's. Spurred by the Randy Weaver incident at Ruby Ridge and the catastrophe at Waco, fear of government abuse has led to militia organizations in every State. Although these private paramilitary organizations have been consistently judged illegal by the courts for over a century, there is practically no enforcement by local police. By the year 2001 the number of anti-government militias declined substantially from its mid-90's peak of about 800 groups. Whether the groups disbanded or followed the directives to break up into unidentifiable "cells" is open to speculation. But the number of racist and anti-Semitic militias has not undergone a similar decline. There are so many points of view on this major issue that no one book gives a clear picture. This work has seven books in it.

Each book is rebound in Nigerian goatskin, with a quote excerpted from the book tooled in 23k gold on the cover. The endpapers of each book are targets made of images representing the subject of that volume, printed in color on Rives BFK or handmade paper on an Epson Stylus 1500 printer. The targets were taken to a shooting range and shot by Minsky with the Norinco MAK-90, an Enfield 2A-1, and a Ruger 10-22, at distances of 50 feet to 100 yards. Two of the books are shot through the covers. The books are displayed in a snakeskin case designed and constructed by Minsky, with Plexiglas sides and sliding doors. Above the books is a Norinco MAK-90 Sporter, a semiautomatic version of the AK-47 assault rifle. Also in the case are 1,000 rounds of ammunition, two five-round hunting clips, a loaded 40-round "banana" magazine, and a loaded 75-round drum magazine.

Unintended Consequences by John Ross is a gun culture novel (861 pages). It is not about a militia group, but deals with the individual right to own guns and the government's efforts to control it.

The Right to Bear Arms: The Rise of America's New Militias by Jonathan Karl is a sympathetic history of the militia movement by a New York Post investigative reporter.

American Militias: Rebellion, Racism & Religion by Richard Abanes (founder/director of the Religious Information Center of Southern California) is a heavily footnoted analysis of the development of militias published by the InterVarsity Christian Fellowship. It details the sources of The Protocols of the Elders of Zion, an anti-semitic Czarist fraud perpetuated by Henry Ford, Adolf Hitler, and groups like The Aryan Nation and Christian Identity, which have provided substantial founding support for the militias.

The Limits of Dissent: The Constitutional Status of Armed Civilian Militias by Thomas Halpern (Anti-Defamation League) and Brian Levin (Southern Poverty Law Center) is Title No. 3 of the Law and Violence Series of Aletheia Press. It is presented as interviews with the two authors on the history of right wing participation in militias and the legal status of private armies.

A Force Upon the Plain: The American Militia Movement and the Politics of Hate by Kenneth S. Stern (American Jewish Committee) reviews the same issues as many of the other authors � Ruby Ridge, Waco, Oklahoma City � and the major players, who come from the Ku Klux Klan, the neo-Nazis and other white supremacists. The Jewish organizations are particularly involved because of the claims by some of the Militia leaders that ZOG (the Ziionist Occupational Government) is in control of the United states and is the true enemy.

Gathering Storm: America's Militia Threat by Morris Dees (Chief Trial Counsel, Southern Poverty Law Center) documents the hate group roots of the militia movement. Dees is intimately familiar with the players. Militia spokesman and former KKK Grand Dragon Louis Beam was prosecuted by Dees when he led the KKK intimidation of Vietnamese fishermen in Texas. Dees' office was firebombed, and he is a target of assassins. This book has a substantial photo section which includes William Pierce, leader of the racist National Alliance and author of the 1978 novel The Turner Diaries (which tells the "history" of the successful Aryan Revolution and is believed to be the manual used by Timothy McVeigh in planning the Oklahoma City bombing). Other detailed players with photos are John Trochmann, founder of the Militia of Montana and Christian Identity's Pete Peters, whose followers include the Army of Israel militia. This sect believes the Aryans are the true Jews and the people who call themselves Jews are literally descended from Satan. They consider this a Holy War.

The Rights of Gun Owners by Alan Gottlieb contains the legislation affecting gun owners and a state-by-state summary of local gun laws. 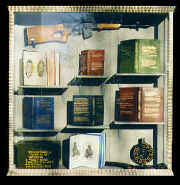 An alternate display, showing some endsheets