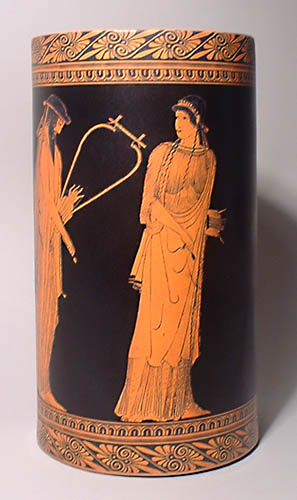 Greek scrolls generally were vertical scrolling, but this scrolls horizontally in keeping with the page format of the printed book. The title page is at the end, rather than the beginning of the scroll. This was the ancient tradition, to keep the title at the most protected part of the scroll. 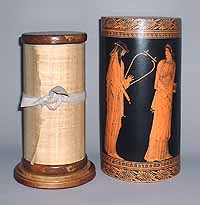 Upon removing the cover, a papyrus scroll is seen.

The papyrus with Sappho's text from a 2,300 year old fragment. 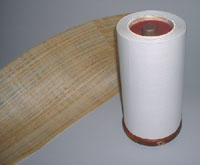 A handle for the scroll is contained under the endcap.

The cedar handle screws into a brass bushing in the bottom endcap.

The Minsky label is on the base.

See a Minsky project featuring Sappho wedding fragments, on a  diptych made as an anniversary gift: